Several special guests have been confirmed on the Celebrating David Bowie tour across North America. In Los Angeles, Joe Bonamassa and Eric Schermerhorn will join CdB musical director Scrote and former Bowie musical director Adrian Belew, Todd Rundgren and the cast of artists present at all appearances. In Anaheim, former Fabulous Thunderbirds guitarist Kid Ramos will perform Stevie Ray Vaughan’s contribution to “Let’s Dance,” as will Joe Bonamassa in Los Angeles. In Chicago, Bowie’s beloved former backing vocalist and girlfriend Ava Cherry will make a special appearance. In Annapolis, Thomas Dolby, who performed with Bowie at Live Aid and various later projects, will perform in both area appearances. And in Nashville, Kirk Fletcher will perform Stevie Ray Vaughan’s contribution to “Let’s Dance,” while Bonamassa and Kid Ramos are in Southern California. Finally, guitarist influencer RJ Ronquillo will perform with the ensemble.

Scrote (aka Angelo Bundini) is teaming up with maverick music director Miles Copeland to produce the tour this year. “To face the show with revered innovators Todd and Adrian is an incredible honor. We can’t wait to unleash a three-guitar attack for an epic song-fueled ride for all Bowie fans out there.

The rotating ensemble of world-class multi-instrumentalists will perform a show highlighting the elements that influenced Bowie and celebrating the spirit of Bowie in live performance. Scrote shares, “One of the things we’re doing differently on this tour is having a three-guitar attack. David has always been famous for his spectacular guitarists – the epic solos of Mick Ronson, the bluesy feel of Earl Slick , the funkiness of Carlos Alomar and Nile Rogers, the brilliance of Reeves Gabrels, and the otherworldly guitar of Adrian Belew who is still one of the most original guitarists working today. guitar facets of Bowie’s songs, we feature Adrian’s genius, Todd’s guitar magic, and everything I can muster between guitars In addition to fierce guitars, we have six lead singers in this band who also play other instruments, sax and a super groovy rhythm section.We can’t wait to incorporate all of this collective musical firepower to fully flesh out many of David’s greatest songs.

The tour will celebrate music education in partnership with Todd Rundgren’s Spirit of Harmony Foundation which champions the moral imperative of music education for children. Volunteers will be present at all shows to provide music lovers with the opportunity to learn more about their grassroots work and how they can get involved in their communities. 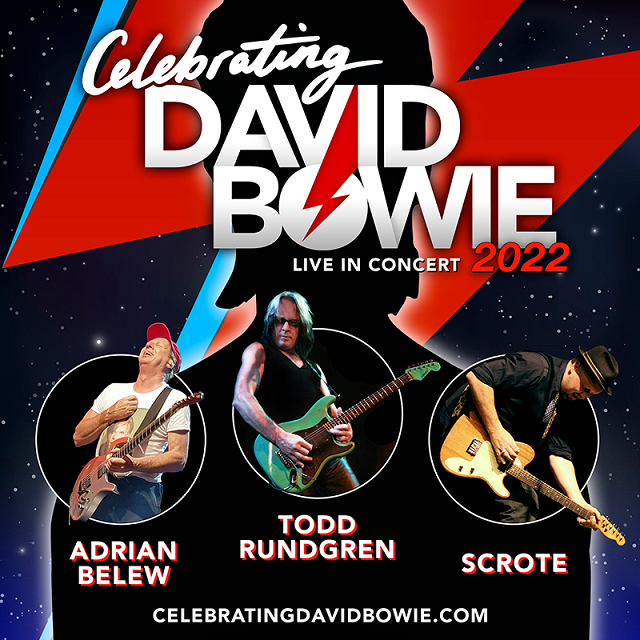